Ritzy Fishcakes- ‘the best thing you never had’

These are absolutely lovely. They’re made with a crunchy crust made from Ritz crackers, meaning you don’t have to slave away over the hob turning the cakes over. I adapted the recipe from Nigella’s fishcakes in Feast. She uses both smoked and unsmoked haddock, but I chose just smoked, because I like that flavour. TBH, I wasn’t sure of my measurements I just went with the floew, but the thing about this is that you can adapt it to however way you want. You honestly don’t have to follow it to a T, like a bread or souffé recipe. If you want a lot more fish, which we did, use less potatoes. My ingredients made 11 cakes in total. Your staple ingredients are only: fish, potatoes and crackers. Thrifty? Yes indeedy. P.S let me know how these photos are turning out, they were the hardest to photograph. 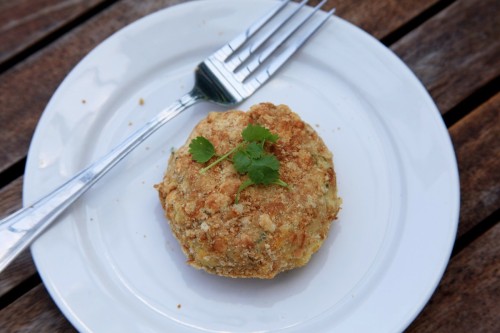 – Preheat the oven to gas mark 6. Peel the potatoes, chop them up and boil them in water for around 20 minutes or until they are soft when prodded with a fork. Once they are done mash them up, I think at this point you should add milk, a knob of butter and pepper so the mash tastes nice, but it’s your opinion.

-Whilst the potatoes are boiling poach the fish in the milk. In order to do this, put the milk and fish in a pan with some pepper and a few bits of parsley. Make sure that the fish is covered, but don’t DROWN it. Bring to the boil and simmer from about 6 minutes, turning from time to time. You can tell when it’s done if you take a chunk from the fish, and if it has lost its ghosty translucency, then it’s done.

-Drain the fish in a sieve and flake it. Attempt to take the bones out of the fish if you can.

-Add the flaked fish to  the mashed potatoes, adding the parsley, salt and mustard. Make sure the mixture is well combined.

-Now, take the plastic bag out the Ritz packet, and with a fork poke a hole in it so you let the air out. Then a get a rolling pin and smash the mixture until it is crushed in crumbs. Empty the crumbs into one or two baking dishes depending on how  many cakes you’re making, I needed to two dishes.

-With your hands, make some patties with the fish and potato mixture, and put in the baking dish, making sure the crumbs are pressed firmly into the cakes and leave in the dish of crumbs. Don’t worry, there will be lots of crumbs remaining.

-Cook for 20-25 minutes, or until the exterior begins to crack. Enjoy with tartare sauce and greens.

Filed under Fish, Snacks and Starters

8 responses to “Ritzy Fishcakes- ‘the best thing you never had’”