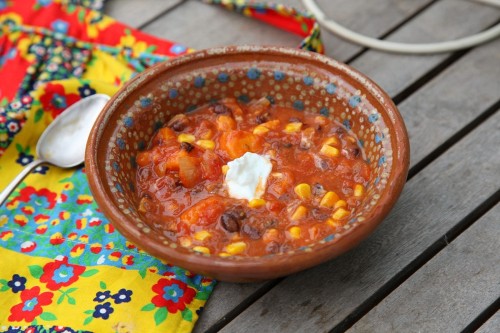 When I was first a vegetarian, I thought that if you add substitute meats it would not taste different. I thought it would be like nothing had ever happened…like the companies make you believe. Well they were wrong, I spent a lot of my time buying sachets of spaghetti bolognese and chilli spice mix because my food just tasted bland and depressing. I should have realised that vegetarian chilli tastes better without fake meat, and bolognese tastes better with lentils. So the secret to flavourful veggie chilli? No substitute meats, and lots of pulses which absorb all the flavour.

And the secret to cheap chilli? The world food aisle. I was so happy when I went into Tesco’s and they had a special aisle for, I think, the Hindu festival of chariots. Lots of cheap chopped tomatoes, curry spices etc. But venture in to the world food aisle for black beans, jerk spices and cheap fizzy drinks! 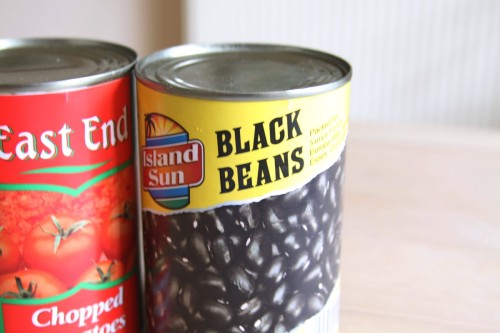 -1 can of chopped tomatoes

-Place the sweet potato in a pot and cover with water, bring to the boil and simmer for 10-15 minutes until they are soft. Drain.

-While these are boiling you can chop up your onion, carrot and garlic and fry in a casserole dish with a little bit of oil. Add some salt.

-Add the sweet potato and seal the edges.

-Add the remaining ingredients apart from the cornflour and bring to the boil. When the sauce begins to thicken add the cornflour. Leave the chilli to cook for an hour and serve with all your favourite Mexican garnishes! 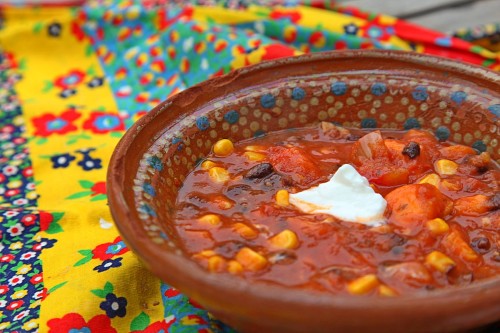