MMM, tabouleh, eh? Who doesn’t love some Mediterranean freshness to pick them in the ridiculously foggy weather up here in Leeds, and whereever you are. I’m sure the weather is pretty much dismal everywhere. I don’t seem to be taking that much notice or even care because I am so happy to be finally healed (touch wood), after having been injured for the past 2 1/2 weeks in the run up to two races. My first 10k took place on Sunday 20th and it was incredible, I got 46:43 which I’m happy with seeing as I hadn’t done any proper training and it was my first 10k, and I hadn’t really been able to break past the 8 minute miling stage in the run up to the race. Anyway blah blah blah, I did it and pain free.

This tabbouleh is gorgeous because it has the spiciness of the raw red onions and jalapeños, which the tomatoes and sultanas cut through. Of course, feel free to make this ‘sweet’n’spicy’-less by ignoring the jalapeños and sultanas which are an addition of my own. 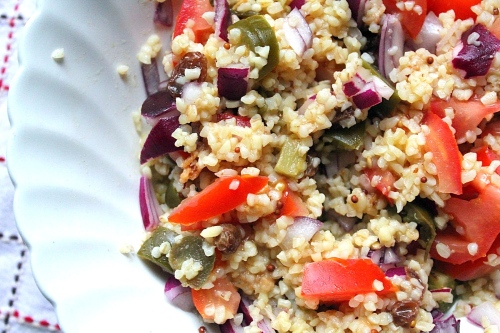 -1 tsp whole grain mustard-SHAKE IT ALL UP.

–Put the bulgar wheat, sultanas and water in a saucepan and bring to boil, once boiling lower to a medium heat adding the vegetable stock, cayenne and cajun spice. A little salt wouldn’t go amiss too. Cook the bulgar wheat to packet instructions, normally 15 minutes, or until it is soft. Drain it.

-Chop up tomatoes, onions and jalapeños finely. Add these to the bulgar wheat and sultanas, mix and fluff up with a fork. 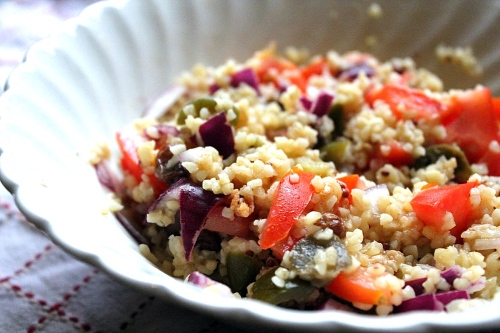 One response to “Sweet’n’Spicy Tabbouleh”