Shockingly good actually, but I didn’t want to make that the title. It seemed a bit presumptuous.

These are part of my ‘Cooking Up My Bookmarks’ mission. It’s going well so far.

These are date brownies. They aren’t called date brownies because eating a lot of them will get you a date (they wont, I’ve tried) , but because they have lots of dates in them. AND WE ALL KNOW, dates really rule when it comes to sweet things #datesquares #stickytoffeepudding.

I love brownies. They have to be really fudgy and sickly. And chocolately. My mum makes amazing brownies, and I always swore that she did. But then my friend made these even more amazing brownies with melted chocolate. They were nice.

They reinstated a love of brownies in me, and so, to make brownies REALLY EXCITING, I wanted to make a healthy recipe for them…party at my house.

How are these made healthy? Well, they don’t have butter, sugar, eggs or flour in them. DAT’S RIGHT. They have pearl barley flour in them, this is made by grinding pearl barley. This did mean that there were bits of pearl barley in the brownies, but they were edible and I’m fine 12 hours later. So hey, it’s okay! By the way, a food processor is necessary.

So what do they actually taste like? OMIGOD, they taste so good. I was so dubious, but these are rich, and gooey and very chocolately. The texture is very dense, and the flavour is nutty and chocolatey, a bit like a Kinder Bueno.

Ingredients- Cooking THIS but with a lot of variation

-1/4 mix of hazlenuts and almonds

-In a bowl, pour the hot water and vanilla essence over the dates and set aside.

-In a food processor, process the pearl barley and nuts for as long as possible. It should be very finely processed,  but there will be some bits of pearl barley that don’t get processed. Seive the mixture into another bowl, you basically want to get rid of all the whole bits of barley, and set aside.

-Get your date mixture, and put into the food processor. Process for about 1 minute until the mixture is paste-like .

-Add the cocoa mixture and the peanut butter to the paste-mixture and process until everything is well-combined.

-Pour the batter into cake tin and cook for an 45 mins-hour. They are ready when the top of the brownies is very firm and when you poke a knife through it, it comes out clean.

-Leave to cool before cutting. And eating. 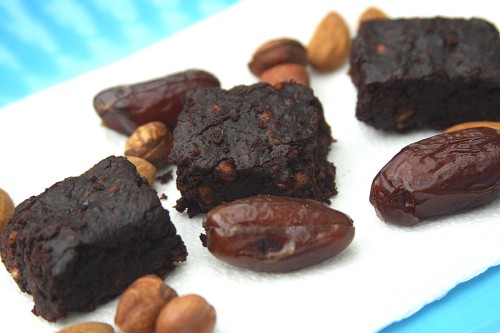